Ancient stories narrate that on 18 January 1606, the sailing ship “Santa Maria di Montenero” sailed from the Spanish port of Alicante heading towards Genoa. The ship, in addition to sixty passengers and various merchandise, carried a Genoese merchant, Nicola Sasso, with a case containing a wooden simulacrum: the SantCristus, which he was to hand over to Varazze to the client Francesco Pera.

He never arrived at his destination. The ship came across a shipwreck off the Bay of Porto Conte. Most of the passengers were saved and with it also the SantCristus.
After various vicissitudes, from the Convent of Nostra Signora della Pietà to the Church of Santa Barbara, in 1738 the case containing the Crucifix of Alicante was taken to the Church of the Misericordia, a small oratory ever since the seat of the Confraternity of the Jermans Blancs.

<<The legend tells that the Christ was found inside a case arrived casually on the coasts of the city of Alghero; he did not let anyone take him only from a young Jermà Blanc who pronounced the word “Cristhus”.>>

Since then, the brothers of the Misericordia carry the SantCristus in procession every year during Holy Week in Alghero and venerate it according to the story of the Passion of Christ, through the Holy Friday processions and the rites of the Arborament (rise), during which the crucifixion is recreated, and of Desclavament (downhill), during which the deposition of Christ in the sepulcher is simulated.

The first event of Holy Week, preceded by the procession of the Passion Friday, is the Procession of the Mysteries on Holy Tuesday: from the Church of St. Francis the statues of the mysteries trace the streets of the old city.

On On Holy Thursday, during the Procession of Las Cerques (the cercas), the Confraternity accompanies the simulacrum of a Virgin of Sorrows, dressed in mourning, in search of her dead Son for the churches and tombs of the city, and then ended with adoration of the Blessed Sacrament.

The suggestiveness of the Holy Week explodes during the Holy Friday rituals: already in the morning the SantCristus undertakes the Via Crucis with which it will be transferred from the Church of the Misericordia to the Cathedral of Santa Maria where the rite of the Arborament (raising) will take place, the Christ is raised on the cross and watched until the evening by the Jermans Blancs.

On the night of Holy Friday, all the faithful gather under the cross to attend the rite of Desclavamet (descent), during which the four barons reproduce the role of the Jews who laid the body of Christ in the tomb and, under the direction of the priest, free the SantCristus:

first the head from the crown of thorns, which will be placed on the head of the Madonna, and then hands and feet from the rivets, showing each of these to the faithful present at the foot of the cross.
The Christ is gently slid with the aid of the bands, presented to the Madonna and then placed comfortably in the bressol (cradle).

Through the silent streets of the Historic Center, under the red light of the city lampposts and the sound of the prayers of the faithful, the mourning procession accompanies the Dead Christ to the Church of Mercy, where it finds rest in a sepulcher set up at the foot of the altar. Throughout the night the faithful bring homage and prayers to Christ. 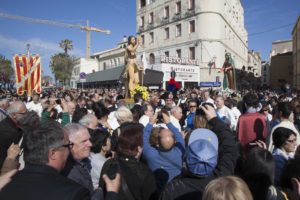 The rites of Holy Week conclude with the meeting between the Risen Jesus and the Madonna to the sound of gunshots of rifles and, as a sign of glory, of the festive bells of all the churches in the city.