The fortified system of Alghero was originally composed of 26 square towers, built in the Middle Ages, thanks to the Genoese. Seeing that the defense system was weak, the Catalan/Aragon restored the towers in the mid-XVI century, in order to better protect the city. Fernando “Il Cattolico”, although keeping the same structure, decided to shape the defense system in shorter and stronger walls. The ground defense was also fortified thanks

END_OF_DOCUMENT_TOKEN_TO_BE_REPLACED 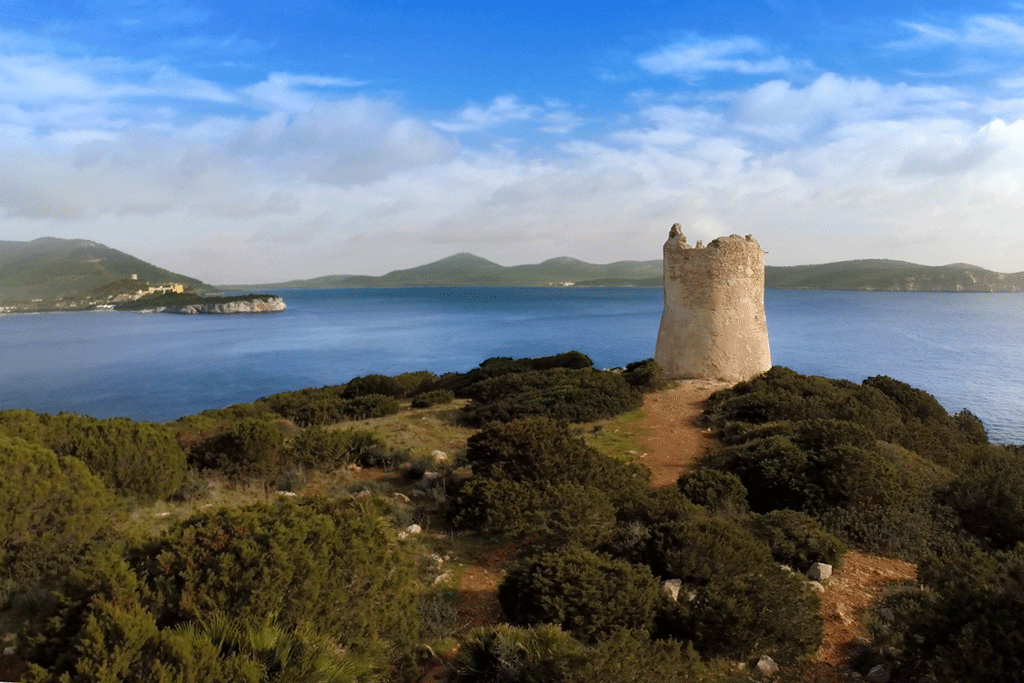 Between Cala Dragunara and Capo Caccia there is the Torre del Bollo or Torre del Buru, is one of the smallest towers. Also known as Torre del Cala Genovese, the tower has a cylindrical shape and was used as a beacon. 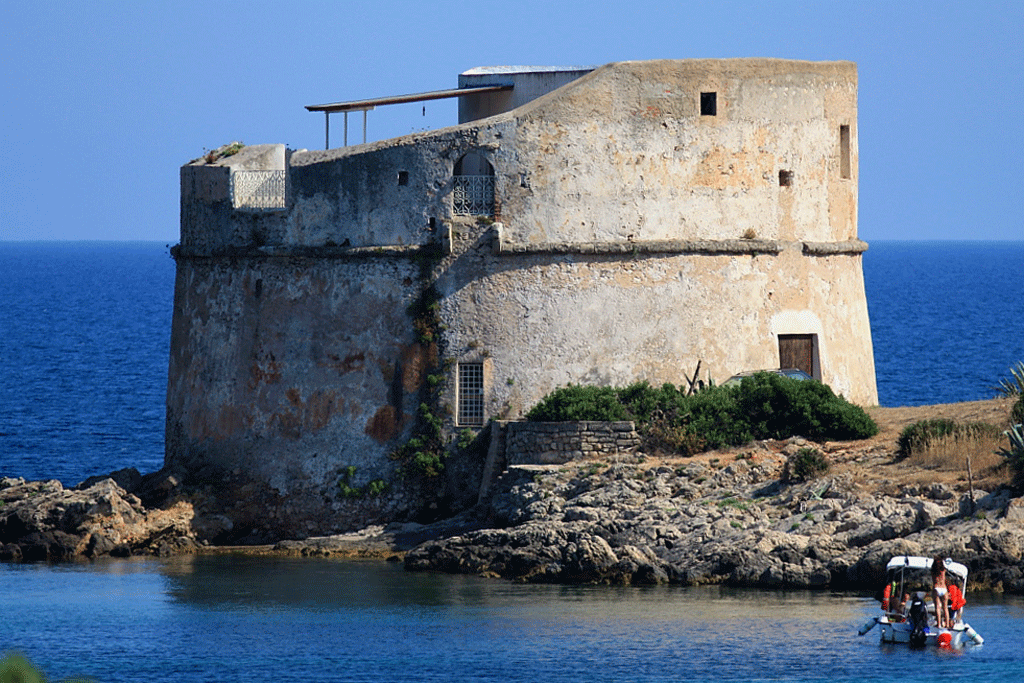 The Lazzaretto Tower is located in Capo Galera, 10 km far from Alghero, between Fertilia and Punta Giglio. It was built in 1572 in limestone, and the structure is the same as Torre di Poglina, and 8 meters high. It is in a good shape, thanks to the upkeep. Although under the the supervision of Beni Culturali, it is a private residence. 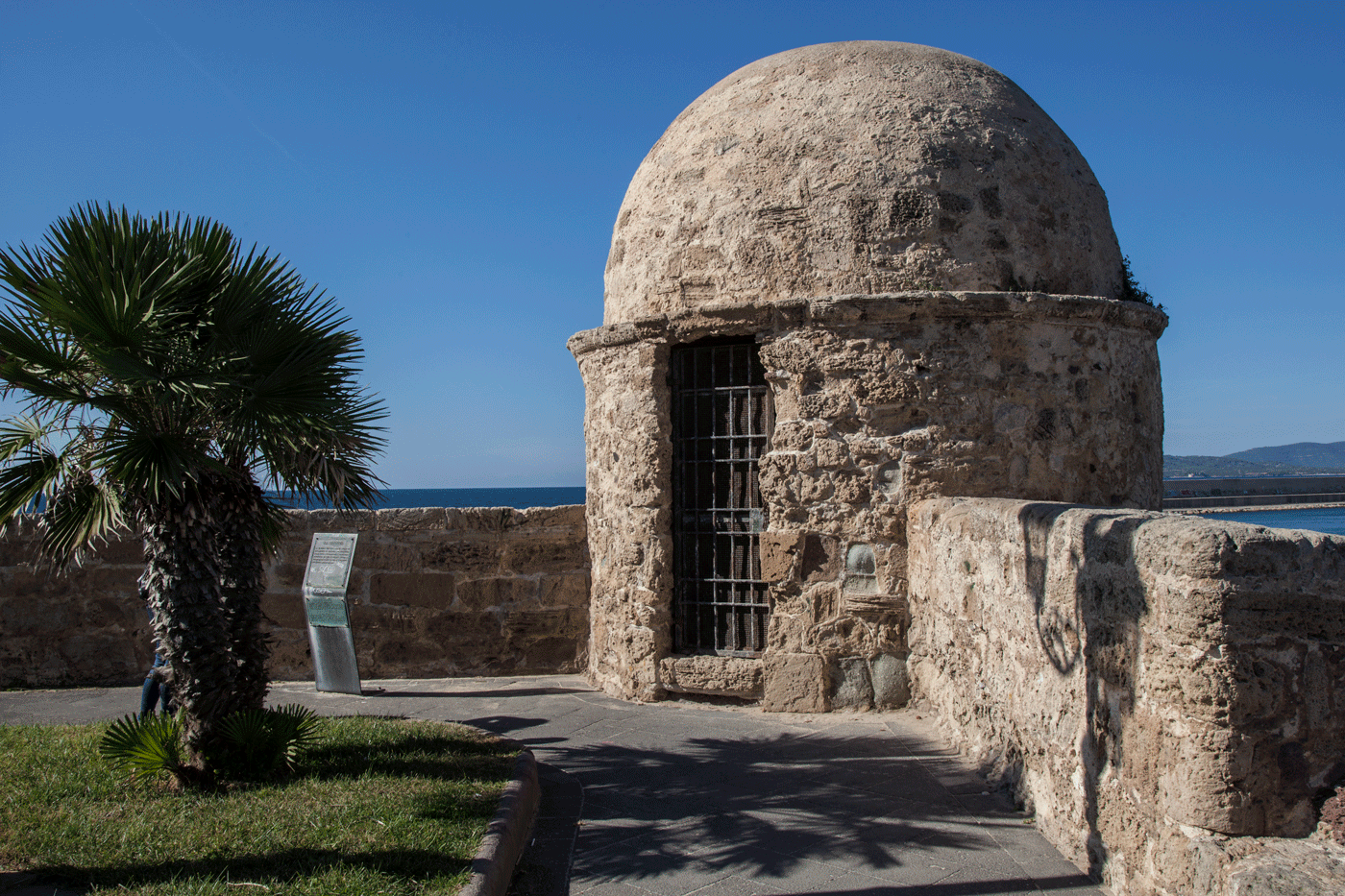 Located in a position from which it is possible to have a clear view of the entire Gulf of Alghero, its role was that of guardian of the coast. It is also called Torre della Campana, for the presence of a bell above the dome, and used to inform the sailors of the closure of the dockyard. 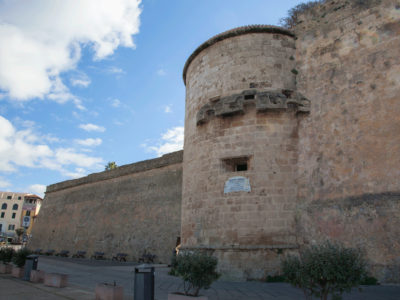 At the beginning of the Bastioni della Maddalena, in the area named Molo Dogana there is la Torre della Maddalena, built in 1500 over the pre-existent fortification. The tower is linked to a fort that throughout the centuries was used for many purposes. At the beginning of 1900, for example, it was a construction site for ships. The tower presents the typical structures used to throw boiled oil and water

END_OF_DOCUMENT_TOKEN_TO_BE_REPLACED 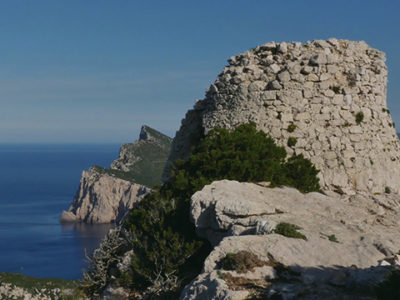 Built on a crag, 271m above the sea, in the Western part of Capo Caccia there is la Torre della Pegna, named after the area, called like that during the Spanish domination. In Spanish, in fact, peña means cliff. Built in 1572, it was a strategic observation point, and a part of the defense system against the enemies. It is located in the state-owned forest, and is accessible after crossing

END_OF_DOCUMENT_TOKEN_TO_BE_REPLACED 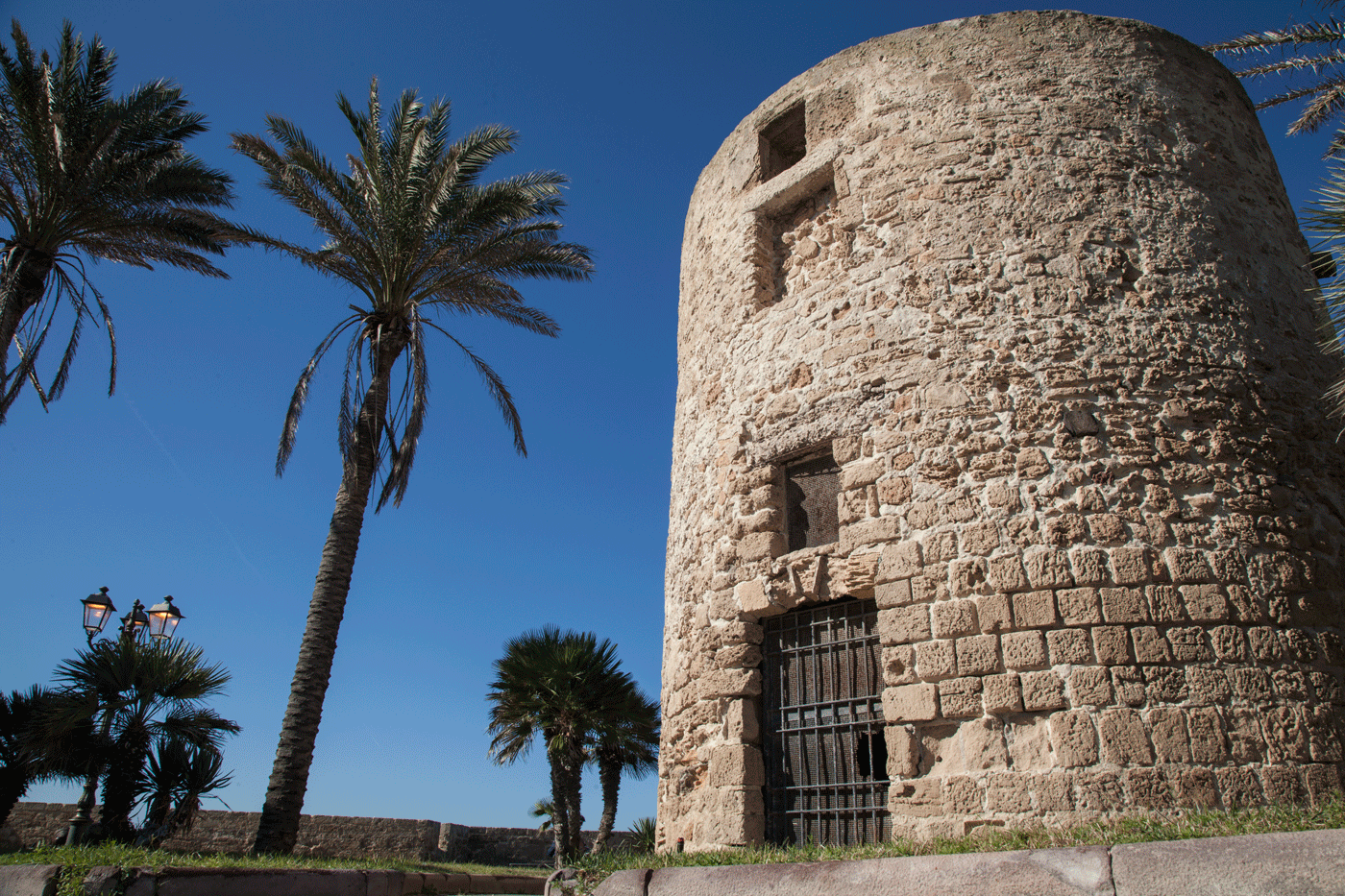 Located in the oldest side of the Bastioni, and entitled to Antonio Pigafetta, the Torre de la Polveriera begins in the slope that brings to Santa Croce Square and until the back walkway of Sant’Elmo tower. The Torre della Polveriera is located on the northern side of Torre della Campana, and it was built in mid-XVIII century, during the Savoia domination, and it was used as a weapon storage. 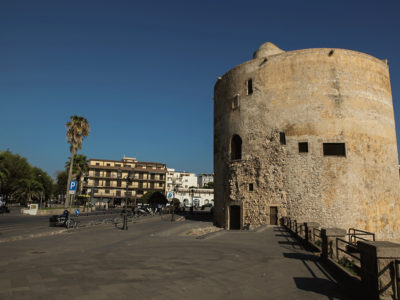 The “Torre dello Sperone Reale” is certainly the majestic of the entire fortified system. In fact, the emperor Carlo V, during a trip to the city in 1541, said “bonita por mi fe y muy bien asentada”. The perimetral walls are 6 meters thick and the two floors are linked by a spiral staircase that grants the access to the upper floor. The tower is historically relevant for the heroic

END_OF_DOCUMENT_TOKEN_TO_BE_REPLACED

The Poglina Tower is 8 km far from Alghero, and on the road to Bosa. It is best known because in 1960 there was a secret military base. It was built in 1572 with a defensive purpose. The tower has a conic base, while the upper part is cylindrical, and is built on a single level. As of today, it is in a bad shape. 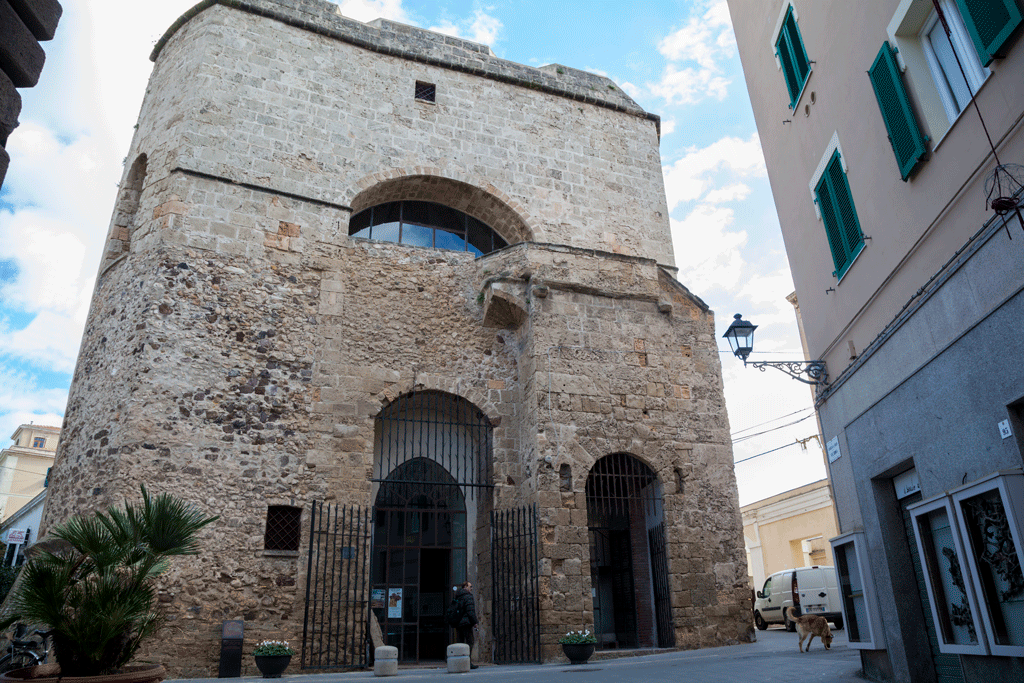 In Porta Terra Square there is the Porta Reale or Portale Tower. Built in 1500, it represented the main entrance to the city, overlooked by the stone shield of the Aragonese Kingdom, now kept inside the tower. The door closed at sundown and allowed the entrance to the city until the end of 1800, when the militia left Alghero. It was renamed Porta Terra under Sabaudian rule. 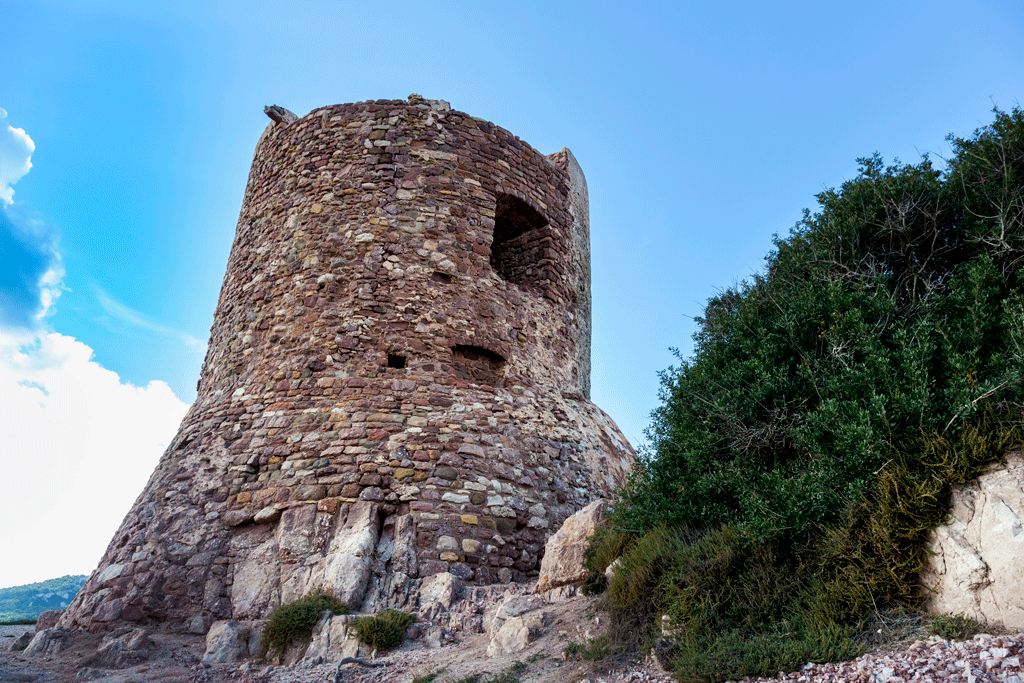 The Porticciolo Tower, built in the second half of the XVI century, was used to signal the presence of the enemy, in constant connection with the Porto Conte and Porto Ferro Towers. It was restructured in 2009. 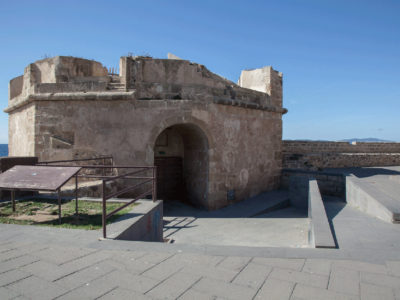 In the final part of the Bastioni entitled to Christopher Columbus, there is the octagonal tower of San Giacomo. Built in the XVI century to honor King Giacomo I “the Conqueror”, the tower shows typical Catalan patterns, such as the recess in the entrance and the spiral staircase that brings to the lower floor. Known as “Torre dei cani”, because it was recently used as the city dog shelter, San

END_OF_DOCUMENT_TOKEN_TO_BE_REPLACED 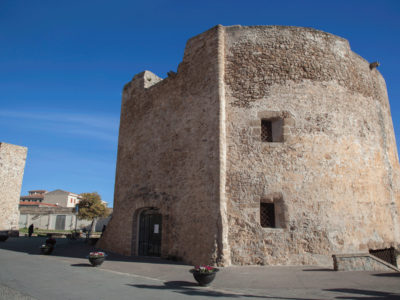 Also named “Torre di Mezzo”, San Giovanni Tower had an important strategic-military and defensive function, and was linked to both Porta Terra tower and Sperone tower. Originally as big as the Sperone Tower, San Giovanni tower was downsized in the 1630s: the entrance was originally located at the base of the upper floor, and was accessible through a gallery on the inside of the curtain. As of today, the tower

END_OF_DOCUMENT_TOKEN_TO_BE_REPLACED 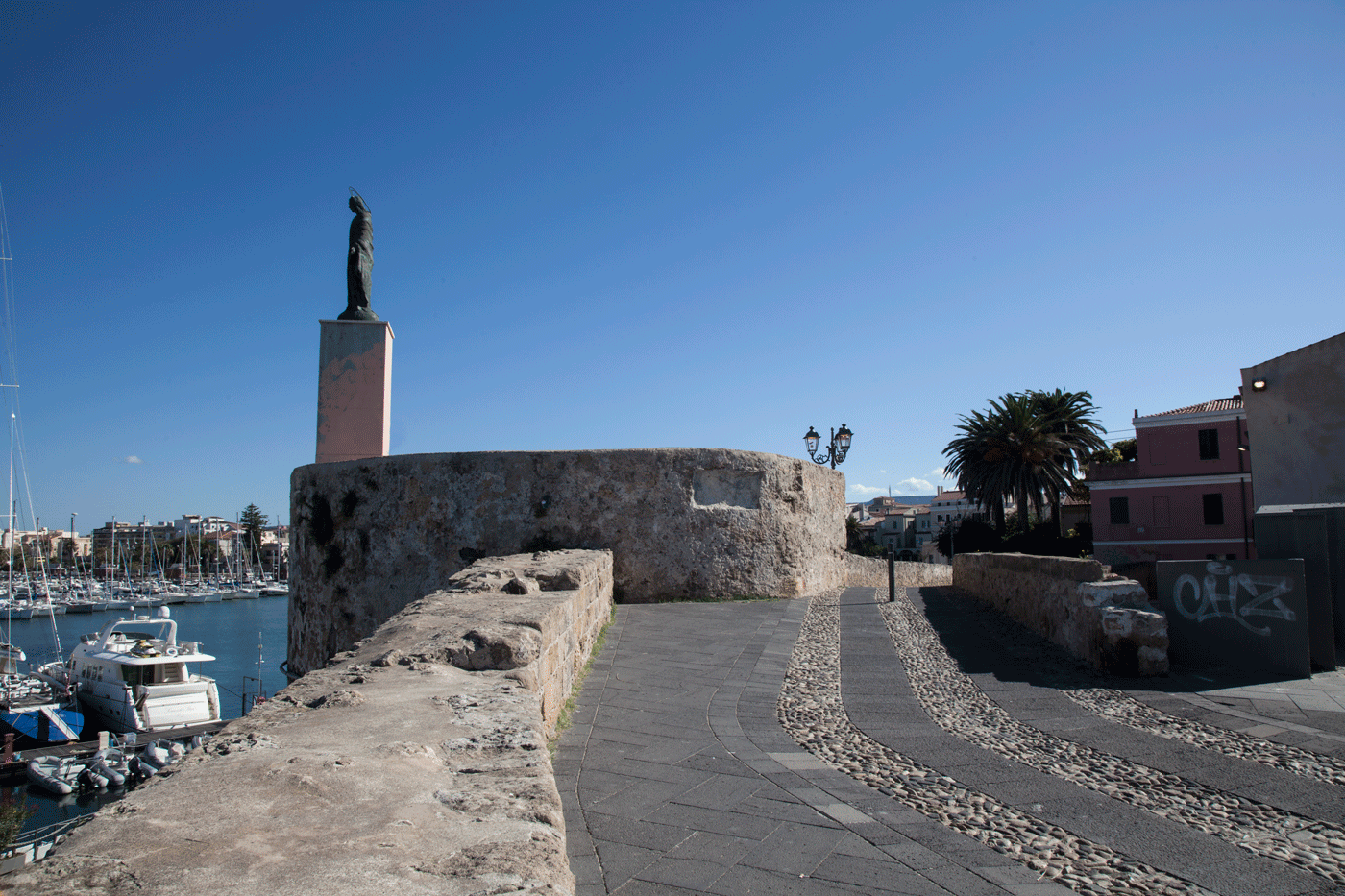 Sant’Elmo tower, characterized by the presence of the Aragonese crown’s crest, has the typical architectural structure of the XVI century buildings. The tower is entitled to Sant’Erasmo, the seafarer saint, whose veneration dates back to centuries ago, as proved by the presence of an altar in a cave nearby Capo Caccia. Since 1950 it hosts the bronze simulacrum of Our Lady of Stella Maris. Nearby the tower there is the

END_OF_DOCUMENT_TOKEN_TO_BE_REPLACED 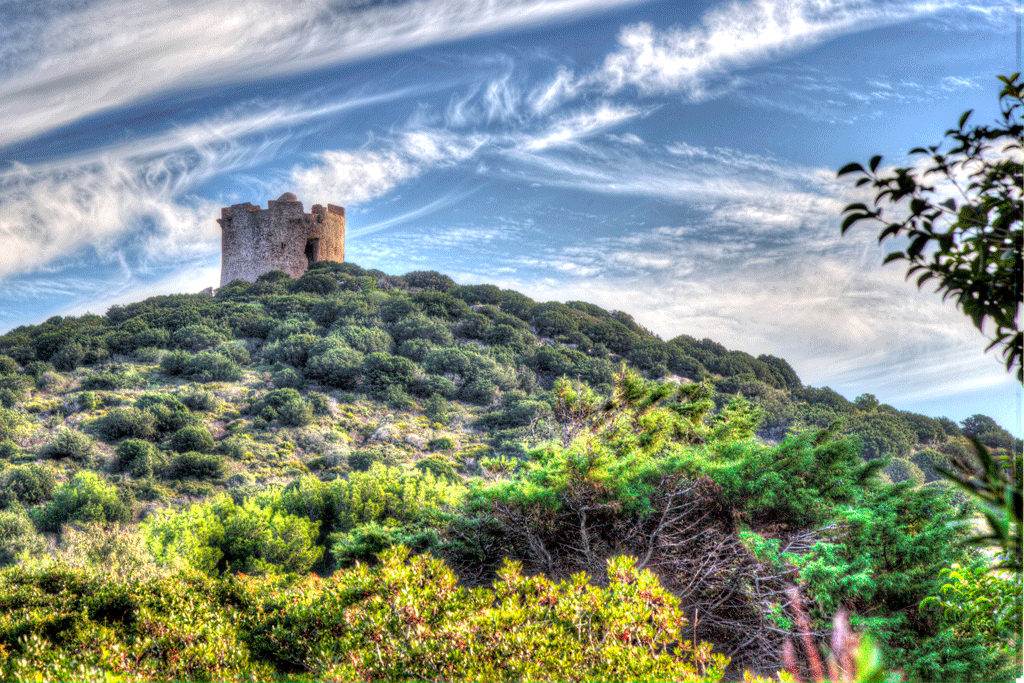 In Porto Conte Bay there is the namesake tower, also called Torre Nuova, and protecting the West coast, the Torre del Tramariglio. Built respectively between 1572 and 1581, the two towers had a defensive function and were also heavily armed. They are both in a good shape. 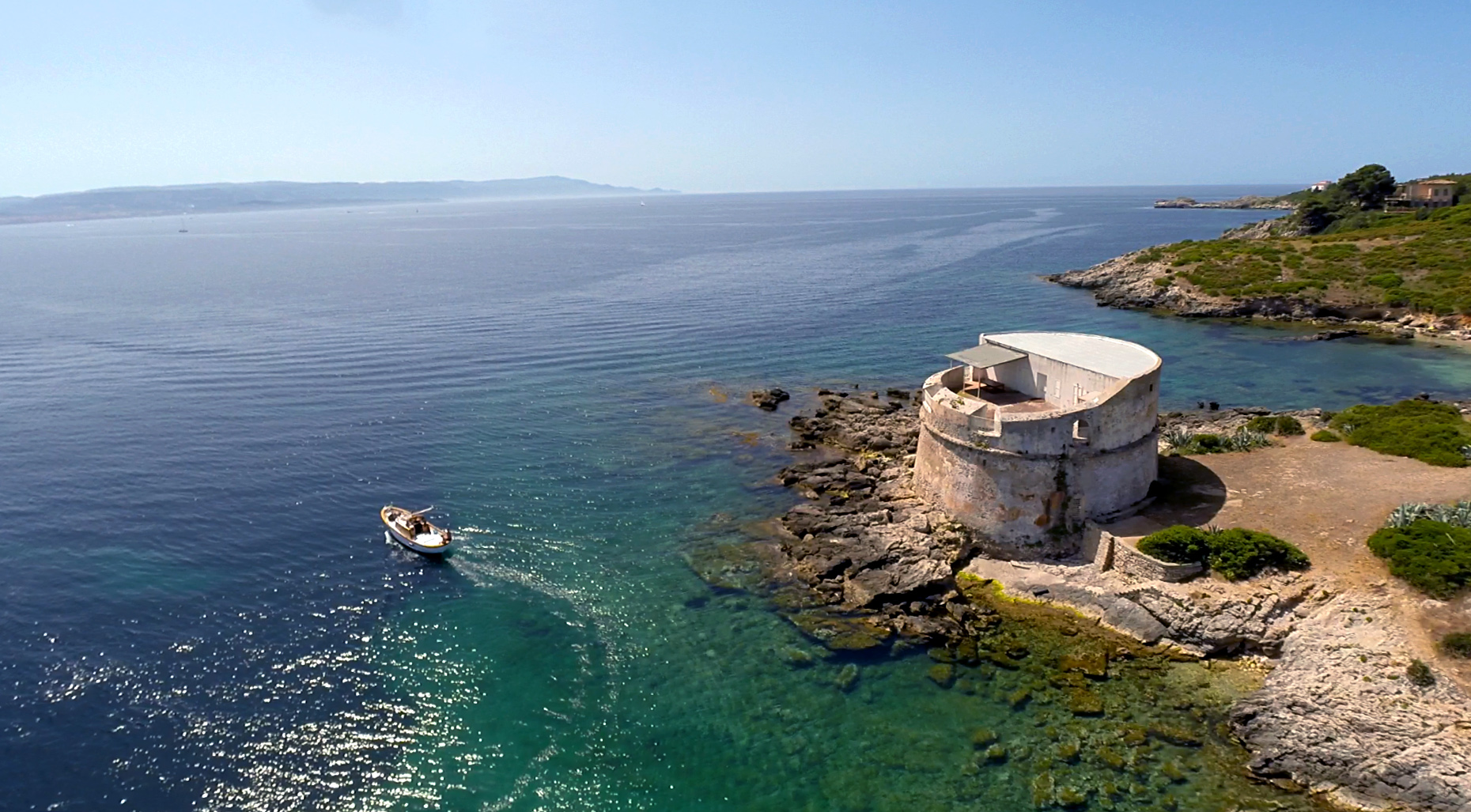 An important element of the cultural heritage of the city is doubtlessly the coast towers system, built in mid XVI century to fortify the defense system of the city. The coast towers cross the coast from Capo Marargiu, in the South, until Punta Argentiera, in the North. The system has 12 towers. 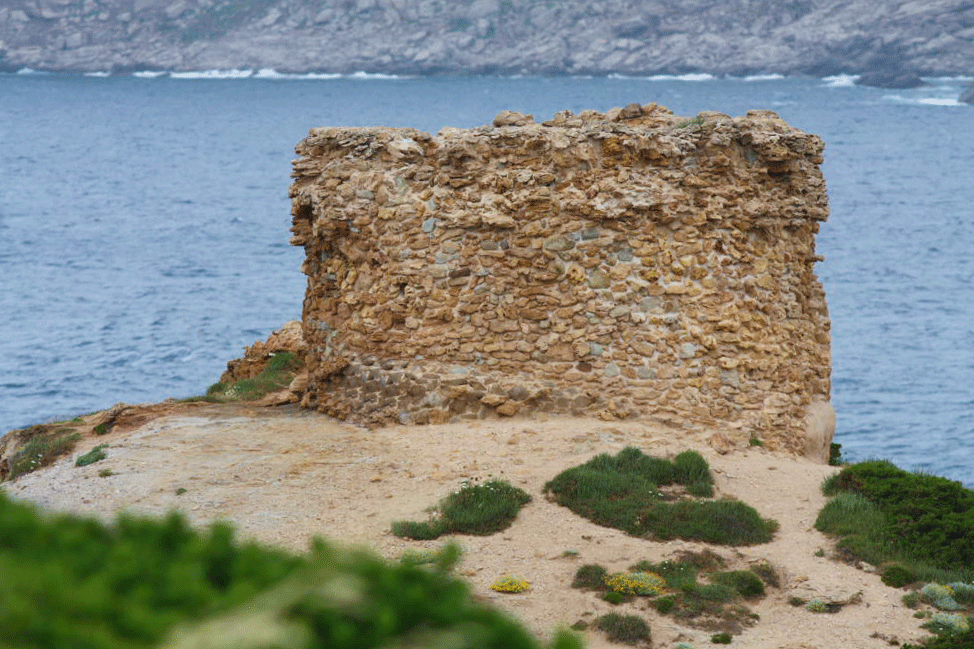 Torre Bantine e Sale dates back to the second half of the XVI century. Also known as Torre Mozza, it is located in Porto Ferro Gulf, an area very much exposed to the enemies attack.               It is a small conical tower in limestone, and although today it is in a really bad shape, it previously was a great observation point on Porto Ferro